The Feature Technical Paper for Structural / Civil is relating to the full inspection of the viscous dampers on the Millennium Bridge after 10 years in application. The inspection consisted of: 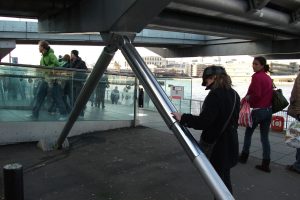 In 2001, Taylor Devices Inc. developed special Viscous Dampers for use on the Millennium Bridge in London, England. These dampers were specified and designed to be used for mitigating the dynamic response of the bridge due to pedestrian traffic. Prior to the integration of the dampers, the bridge had experienced unacceptable movements, especially during periods when larger crowds of people were on the bridge. The result was that the bridge had to be closed until a solution was found. Much research was done and several papers were published about the nature of that problem and the ensuing solution. After successful component level testing and the installation of 37 Taylor Viscous Dampers, the bridge was re-opened to the public in February, 2002. Tests with approximately 2000 people demonstrated a much improved dynamic response. Since that time, the dampers have been subjected to almost constant dynamic input, some more than others. Due to the location of the bridge in central London, there has been nearly constant pedestrian traffic on the bridge each day and even throughout the night. However, because of the specialized nature of the damper design, no degradation in damper performance or in the dynamic response of the bridge itself has been experienced. This paper will outline the specifics in quantifying the continued damper performance through an intermediate inspection after seven years, followed by a successful comprehensive inspection after eleven years. This included the removal, dynamic testing, and re-installation of three selected dampers.