The force-displacement plot generated by the shear testing of an isolator.

The initial stiffness of the isolator, typically at less than one inch displacement. Its value is dominated by the lead core size and is important in controlling the response to service loads such as wind.

The secondary stiffness of the isolator and is a function of the modulus, total height and area of the rubber.

The isolator force divided by the displacement. This is a displacement-dependent quantity.

The force axis intercept of the isolator hysteresis loop. This parameter relates to damping and isolator response to service loads.

The yield force is the point in the model at which the initial stiffness changes to secondary stiffness. In reality, there is a smooth transition from one stiffness to the other, rather than a well-defined point. This value is mainly used in analytical modeling.

This is the area of the hysteresis loop. This value is a measure of the damping of the isolator.

The vertical stiffness of the isolator.

DBE represents the ground motion that has a 10% chance of being exceeded in 50 years.

Q    What does shear strain refer to?

A   The shear strain is the isolator’s lateral deformation divided by the rubber height. Design shear strains can range up to 250% while there have been isolators tested to more than 400% shear strain. At that strain each layer of rubber is deformed laterally to four times its thickness. The extreme shear strains in research tests are a testament to the superior manufacturing processes and compounds used in modern rubber bearings.

Q    How is displacement controlled?

Q    How does added damping benefit the structure?

A    Damping absorbs earthquake energy. The addition of damping reduces the displacements and forces in the superstructure by as much as 50% (See Diagram below). 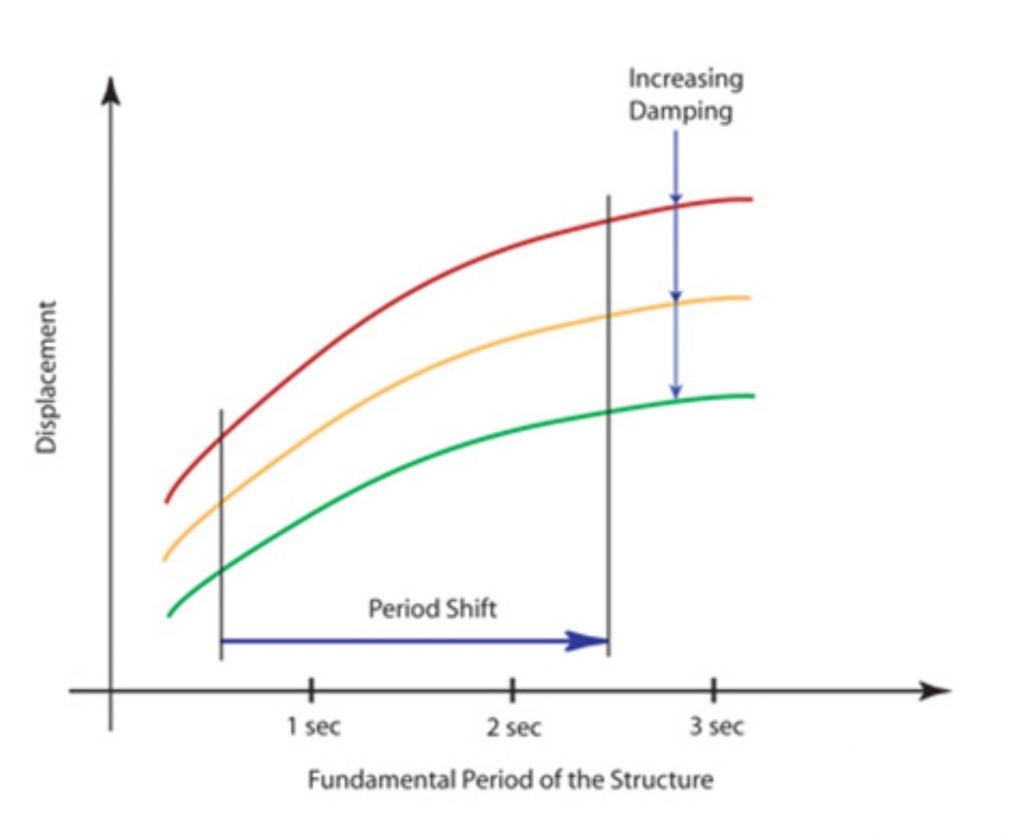 Q    What is the suggested level of damping in an isolation system?

Q   How is the period of the structure shifted?

A    The fundamental period of the structure is shifted by the addition of flexible isolators. The isolated period is generally more than 2 seconds. The dominant frequencies of an earthquake are in the 0.2 to 0.6 second range. The severe accelerations of an earthquake are avoided due to the period shift provided by isolation (See diagram below). 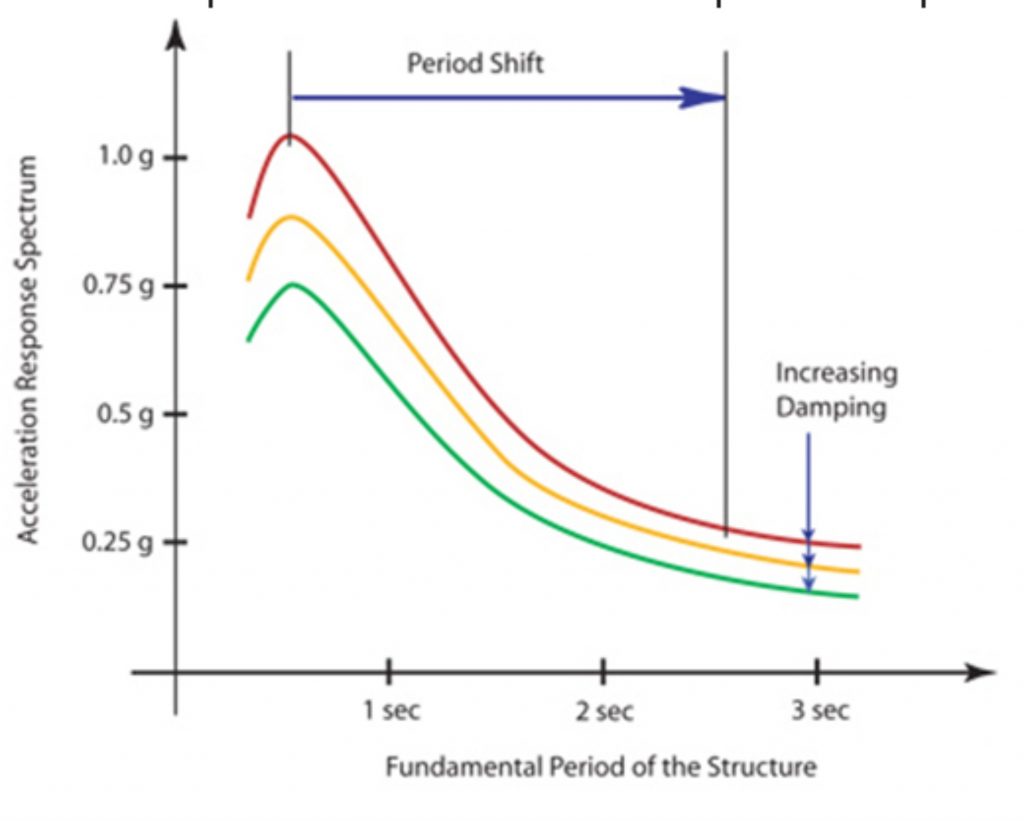 Q   What is the difference of the lead core yield strength at creep loads and earthquake loads?

A    The hysteretic behavior of lead is dependent on the rate of loading. The yield strength is lower at creep velocities than at earthquake velocities. This is beneficial especially in bridges where the isolator moves over a range of velocities. During the high velocity seismic motion, the yeild stress ranges from 10 to 14 MPa. providing significant levels of damping. For thermal movements, the yield stress is in the range of 4 to 6 MPa, which imposes small forces on the structure. Intermediate values of lead stress resist service loads such as wind and braking.

Plotted here are the responses of an isolator over a range of velocities from one cycle in a day to one cycle in twelve seconds. The lead force at low velocity is 60% of that at high velocity. 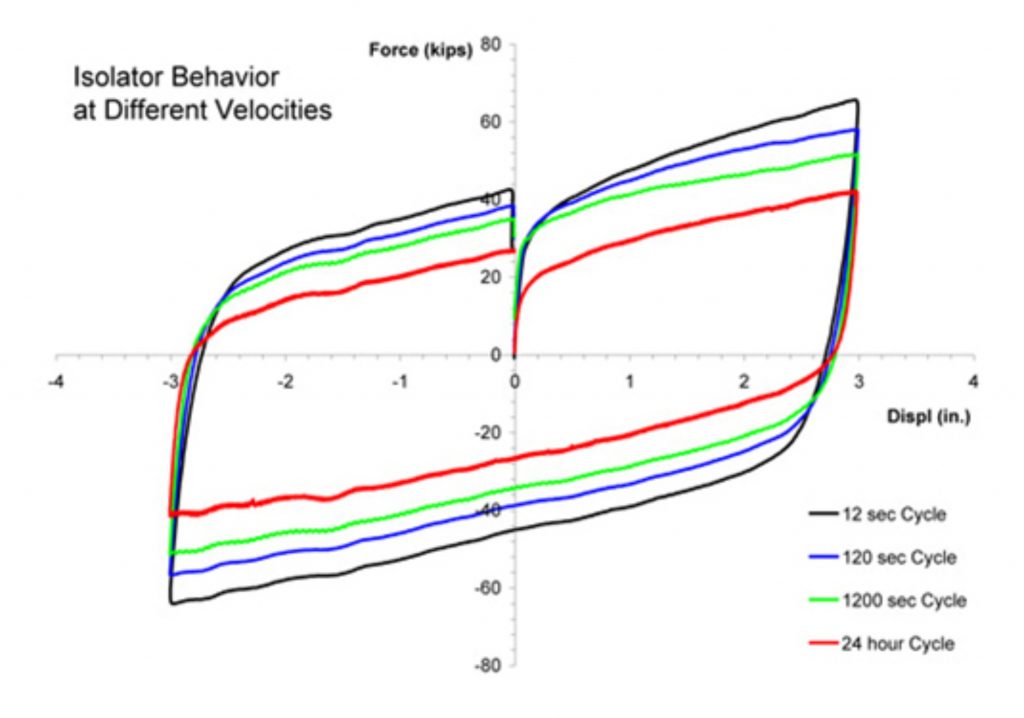 Q    Can a tall building be isolated?

A    Tall buildings such as the 18 story Oakland City Hall in California have benefited from isolation. Buildings normally require the isolated period to be 2.5 to 3 times that of the non-isolated building. There are many tall buildings isolated in Japan that have an isolated period in the range of 4 to 6 seconds. The designers chose isolation for the better performance that it provides.

Q    Does the structure re-center after an earthquake?

Q    What is the response to the vertical component of earthquake?

Q    What is the design life of the bearings?

A    The normal design life of the bearing is over 50 years. Elastomeric pads in highway bridges have been in use for over four decades exhibiting good durability. Isolators with modern rubber formulations surrounded by a protective cover rubber are expected to be more durable and stable in their long-term performance.

A    An allowable tensile stress of up to 50 psi can be applied to an isolator. The actual allowable stress depends on the displacement of the isolator and the rubber modulus. In general, tension is avoided in design.

Q    Can more than one bearing be used under a column?

Q    Does the lead core fatigue?

A    Lead is in its elasto-plastic phase at ambient temperature. As with other metals in this phase, lead re-crystallizes rapidly after being deformed without fatigue.

Q    How do utilities accommodate movement across the isolation plane in the buildings?

A    Utilities that cross the seismic plane must be detailed to move horizontally. They often are made to be flexible or are fitted with universal joints.

Q    How are stairways detailed?

A    Stairways and access points are detailed to be fixed to the superstructure and be “simply supported” on the structure below the isolators. Small sliders are sometimes used to support stairs and accommodate lateral movements.

Q    How are elevators accommodated?

Q    What type of fire protection is needed for seismic isolators?

A    Fire protection is dictated by the requirements for the fire-space, not by the materials from which the isolator is constructed. When isolators are located in areas of the structure with no fire load, fire protection is often not required. When fire protection has been required, then sprinklers, spray-on mineral fiber, fire blankets and fire board enclosures have been used.