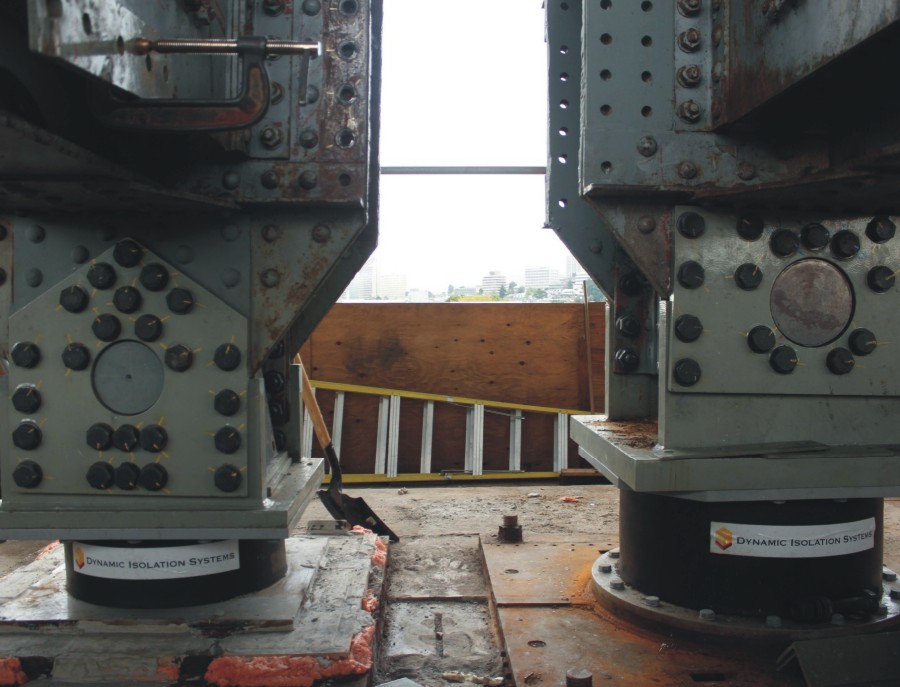 The Granville Bridge is an eight lane vehicular bridge that spans over Granville Island and False Creek, South of the downtown core. The bridge was constructed in the 1950’s to replace the then-existing timber trestle. Providing four lanes of traffic in both the northbound and southbound directions, the bridge serves as a vital link for vehicular traffic, including public transit services.

The main bridge across False Creek comprises seven steel deck truss spans, with a total length of 538 m, and a concrete deck. The approach spans comprise cast-in-place concrete girders. All bridge spans are supported on concrete piers. The entire bridge was previously retrofitted in the early 1990’s The original expansion bearings supporting the main spans were steel rollers in a bath of PCB oil for bearing lubrication. PCB is classified as a hazardous material, and required removal to comply with Federal and Provincial legislation. The City of Vancouver retained Associated Engineering to remediate the original bearings without considering seismic upgrades, a decision predicated on the bridge having been previously retrofitted.

It became apparent through the design phase that bearing remediation provided an opportunity to greatly improve the seismic performance of the Granville Bridge, through the implementation of a seismic isolation retrofit.
The previous retrofit of the steel truss spans target a ‘loss of span prevention’ criterion for a 475-year event. In the proposed seismic isolation scheme, we targeted an immediate or near-immediate return to service for the main spans following a design earthquake. We also examined the expected structure response in larger earthquakes, up to a 2475-year return period event. Our other objectives included:

– Solution needed to be constructible; structure behavior during jacking operations should not cause damage to bridge elements.

– Major elements that are part of seismic load path (such as portal braces and piers) to remain essentially elastic, or suffer only minor damage, during the design event.

– A reserve 50% displacement capacity at isolation bearings under the design earthquake.

– Provide comparable or better seismic performance for the steel spans, compared to the approach spans.

– Eliminate all PCB’s in the bridge bearings.

The first design detail to be determined was the type of isolation bearing to install. In preparing our design we considered multiple bearing types including laminated rubber bearings, lead core rubber bearings (LCRB), friction pendulum bearings, and seismic isolation disk bearings. Factors considered in selected an isolation system included performance, geometry, cost, structural modifications required, and compatibility with existing articulation. Based on these considerations, LCRBs were selected and implemented. The installed bearings range in diameter from 570 mm to 1150 mm. Following discussion with the client, it was decided to divide the isolation retrofit into two phases, with all on-land bearings replaced as part of Phase 1, and the in-river pier bearings to be replaced in Phase 2.

One of the biggest challenges faced during design was to determine how the temporary works and jacking could be implemented to allow safe bearing replacement. The bridge was to remain open to traffic throughout the bearing replacement process, with the exception of a brief closure during initial lifting and lowering of the bridge. This meant that temporary works needed to account for full live load and thermal considerations. The retrofit details include both temporary and permanent jacking diaphragms within the truss chords, pre-stressing the concrete substructure at each jacking location, and hinged jacking supports.

The contract required the contractor to successfully complete 16 jacking operations on the Granville Bridge. 14 of the 16 lifts were completed on Granville Island, Vancouver’s largest tourist attraction, while the remaining two were completed on the north side of False Creek just south of the downtown core.

The contractor, Graham Construction, mobilised in early March, 2013. The first jacking was successfully completed at 4:15 am on July 22, 2013 under a closed Granville Bridge. Over the preceding 4 months leading up to the lift, crew worked on providing access to each pier, completing detailed surveys for steel fabrication, and strengthening each existing bearing location by installing supplementary strengthening bolts.

To facilitate this installation, the crew initially had the labour intensive task of removing over 2000, original rivets, one-by- one from the bridge. In many cases, these rivets were over 150 mm long, and over time, had become fused with the connecting gusset plate assemblies, often forcing crew to manually core through over 150 mm of steel. Noise control measures were enforced during peak times on Granville Island to ensure pedestrians and businesses were protected from unsafe noise levels, often reaching over 110dB at source.

Although many of the existing roller and fixed bearings differed in size; the same basic pre-jacking procedure was carried through on all lifts. This consisted of the installation of permanent and temporary jacking brackets and diaphragms, possible pier modifications, and the installation of jacks, grout pads and final seating of the jacks.

With the equipment installed and seated, and the jacking scheme approved, the bridge was raised by 13 mm. This facilitated removal and replacement of the original bearing assemblies with the new isolation bearing. Once the new isolation bearing had been installed, the bridge could be lowered onto the new bearing and fixed into position. This process was then completed for the bearing on the opposite side of the same pier prior to repeating on other piers in a sequence followed by the other piers in a sequence complaint with the engineer’s specification. As a precautionary measure, the first jacking was completed under dead load conditions only. All subsequent lifts were completed while the bridge was open to traffic.

On average, it took the crew approximately six days to complete each bearing replacement from jacking, through to final installation of the new bearing. Throughout this time, the bridge was supported on two to four 450 tonne custom-made hydraulic jacks. This six day period allowed for the removal of the existing bearing, PCB abatement, and installation of the new isolation bearing. The final jacking was completed at 8:30 am on October 31, 2013, 102 days after the first lift.

Phase 1 of the project is now complete.